I walked out of his house in the hills above Hollywood, telephoned my wife, and said, “I have just met the greatest single human being I will ever meet.” His name is Louis Zamperini. At age ninety-six, he is also one of the most energetic.

Over the course of my four-hour interview, it seemed that Louie’s life story could be described with three words: it gets worse. 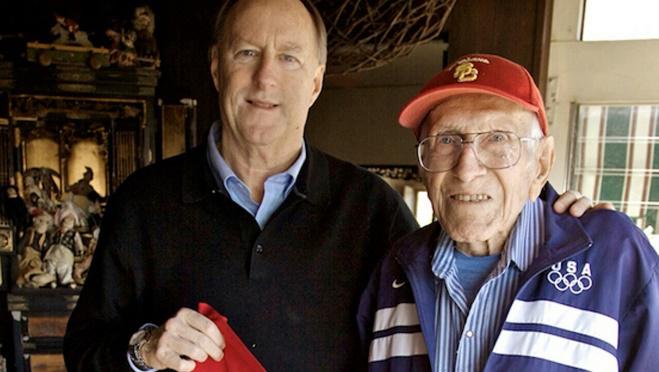 Louie ran in the 1936 Olympic Games, but his hopes for future Olympic glory were derailed by World War II. Louie joined the Army Air Corps, but in May 1943, his bomber crashed into the Pacific.

Louie survived. Then things got worse.

For more than a month, with no food or water, Louie and the two other survivors drifted on a pair of canvas rafts before hitting land. They were near death when they were captured.

That’s where the real nightmare began.

And then it got worse—just when it looked like it was getting better.

Louie’s prison camp was liberated. He came home to the embrace of his family and a hero’s welcome. Louie was a celebrity, but inside he was a mess. Haunted by nightmares, he turned to alcohol for relief. As Louie told me, “Nobody back then had ever heard of post-traumatic stress disorder.”

For the first five years of his post-POW life, homicidal hatred toward his captors consumed him. Nothing in him could prevent his free fall into despair.

Yet Louis Zamperini didn’t slide into the abyss. What stopped him? His answer, in a word was, hope. Louie’s wife, in a last-ditch effort to save their marriage, dragged him to a Billy Graham crusade.

Over the course of two nights, Louie encountered Jesus and everything changed. After the second night, Louie told me he went home and walked over to the liquor cabinet and threw all the bottles into the trash. He hasn’t had a drink of alcohol ever since. That night, for the first time since his liberation, the nightmares didn’t come, replaced instead by peace that passes understanding.

Infused with a new energy—he founded a boys’ camp, embarked on a worldwide speaking tour, carried the Olympic torch at five different Games, regularly ran a six-minute mile in his sixties, began skateboarding in his seventies, and in his nineties was still climbing trees that needed pruning.

I walked out of Louie’s house with a profound appreciation for the power of hope. It was hope that liberated Louie from discouragement, despair, and potential suicide. It was hope that kept him alive in a concentration camp. It was hope that replaced hatred with forgiveness. It was hope that, during the worst circumstances imaginable, allowed him to remain “unbroken.” And it is that kind of fresh hope that continues to make Louis Zamperini one of the most delightful, fun, joyful, and resilient people on the planet.

In my next blog, I’m going to write about a remarkable conversation I had with a psychologist on the transforming power of hope.

Even in the worst circumstances, hope gives you power not only to survive—but to thrive.